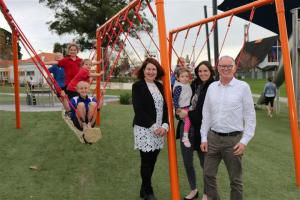 The new double cyclops snake swing in the Village Green is already proving a massive hit with the kids.

The swing, donated to the community by the Mackersey Family Trust, was installed over the last week. The construction fence came down yesterday [May 16].

The Village Green playground was opened in April last year, after a $1.5 million redevelopment including moving the historic Cricket Pavilion from the northern edge of the green into its new central spot near the playground. A new plaza was built out from the pavilion to host events, and a new playground installed.

To help pay for the project, the community was asked to contribute through fundraising, with the Mackersey Family Trust and associated Lowmac Properties contributing $180,000. That was more than half of the funds needed to pay for elements that did not fit within Hastings District Council’s budget.

At the time of the opening, trustee David Mackersey said the trust intended to continue making donations to be used for new playground equipment.

On Wednesday, as soon as the fence came done, the children were into it. Mr Mackersey said it was good to see that the children were so keen on the new swing. “The popularity of the playground since it opened just over a year ago has been nothing less than fantastic and we are very happy to support it.”

His granddaughter Scarlett was a huge fan of the park, and with a sibling due in November and a cousin in June, the newest generation of Mackerseys would spend a lot of time in the playground.

Scarlett’s mum Annah said the swings already in the playground were very popular, so adding another swing element made “perfect sense”.

Hastings mayor Sandra Hazlehurst thanked the trust for the $30,000 donation. “It is wonderful to have people in our community who are willing to support new initiatives such as this. It’s going to be a very popular piece of equipment in the Havelock North Village Green which is loved by so many and we thank the trust very much for their contribution,” she said.