We are biking to the future 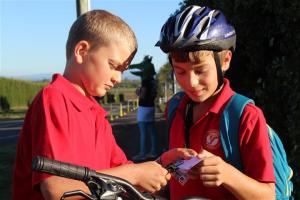 A strong and sustained focus on encouraging children and their parents to choose to bike or walk to school has seen Hastings cycling programmes make the finalists of the national Bike to the Future Awards.

Hastings District Council’s iWay and MoveIt! School Travel Plans, jointly managed by Council, Sport Hawke’s Bay and transport planners ViaStrada, has made the final four in the Bikes at Work and School category.

The awards, in their third year, are organised by the NZ Transport Agency (NZTA) and Cycling Action Network (CAN). They celebrate the projects and people actively supporting and encouraging New Zealanders’ to get around by bike as part of their everyday journeys. The winners of each of the five categories will be announced at a function in Palmerston North on July 31.

Hastings has long had a focus on encouraging cycling. With its mainly flat topography and mostly incredible weather, helping people decide to use foot and pedal power is an “absolute no brainer”, said councillor and keen cyclist Simon Nixon.

Council has, for the last five years, worked hard on encouraging youngsters to bike or walk to school, using the incentive programmes Move It! and School Travel Plans.

The travel plan format sees schools, students, caregivers and the community work together on ways to encourage students to choose an active option for getting to schools, and identify barriers that may be hindering those decisions.

The plans typically see baseline numbers of students’ travel habits recorded, the identification of nearby street safety improvements that may be needed, a review of the school’s existing travel plan, and education and encouragement incentives that will help achieve the aim of getting youngsters out of cars and onto bikes or their feet.

The Move It! campaign was started in 2013. It sees children who walk, cycle or scooter to school have their “move it card” stamped. Once a five-trip card is filled, it is put into a draw for prizes include t-shirts, vouchers and iWay merchandise.

The two programmes work very well together, said Mr Nixon. “You have a strong incentive programme in Move It, and the plans can address some of the issues that parents worry about around safety, particularly on bikes.”

The benefits of getting children to bike or walk to school are multiple, he said. “It is better for their health, it sets up good habits for adulthood, it lessens vehicle congestion around school gates and travel cost savings for parents and caregivers.”