A significant gift for Tonga 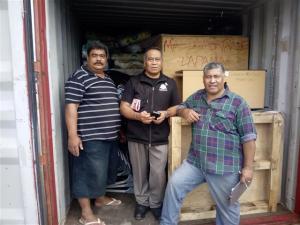 The Hastings District Council approved a grant of $10,000 on March 22, to assist the Tongan Hawke’s Bay Community Governance Committee with the cost of shipping supplies to the victims of the cyclone.

The 40ft container filled with just over $10,000 worth of food, clothing, water and hygiene supplies arrived in Tonga on May 22, 2018 and was last week unpacked and distributed throughout the community.

Tonga was ravaged by the category four storm on 12 February 2018 with winds of up to 278 kilometres an hour.  The storm ripped roofs off homes, caused widespread flooding, electricity outages and water shortages.

Loami Tuakalau from the Tongan Hawke’s Bay Community Governance Committee says the effects of Cyclone Gita continue to cause heartache for the people in his home country.  “On a scale of zero to 10, with 10 being life back to normal, Tonga is sitting at about two.   We all have someone who is still struggling back at home because of the cyclone.”

Mr Tuakalau says when they put the call out to the Tongan community for donations, the response was quite amazing.  “People arrived with food, clothing and emergency supplies all bought from local Hawke’s Bay stores.  Many of the local workers under the Recognised Seasonal Employer (RSE) scheme also gave items for their families back in Tonga.”

Hastings Mayor Sandra Hazlehurst says the council’s decision to help send disaster relief aid to Tonga was an easy one.  “Hastings has a significant Tongan community, many of whom have family and friends in Tonga who needed help with basic supplies to get them through the recovery period.  Naturally, they wanted to help their cyclone-stricken loved ones in their homeland.”

Loami Taukalau says on behalf of the Tongan community, he is so thankful to the Council and the wider community for their generosity.  “This shows the combination of love and concern for the desperate need of Tonga which was heard and felt throughout Hawke’s Bay”.