Zeroing in on waste: Reduction plan 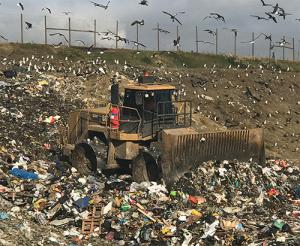 A massive push to at least halve the amount of rubbish being dumped into the Omaranui Landfill is timed to start in October, subject to Hastings and Napier councils approving plans to achieve that.

The focus of recommendations put together this week by a joint Hastings and Napier committee has been developing flexible, easy-to-use and cost-effective ways to encourage residents to get actively involved in keeping as much green waste and recycling out of the landfill as possible. Some initiatives would start almost immediately, others would be phased in depending on the time they took to organise.

One recommendation is that small general rubbish wheelie bins are issued to every home on current council rubbish and recycling routes, with Hastings’ semi-urban areas close to town also considered for the service. It is intended that the bins be emptied weekly at first, with a move to fortnightly as people become more skilled at recycling in future years.

Other initiatives include putting together a major public engagement and education programme explaining the best ways to deal with rubbish and recycling and why change is necessary; working with the waste collection industry to set up an incentive scheme that will strongly encourage people to separate out their green waste to ensure it is composted (either at home or commercially); providing recycling containers to ensure plastics, paper and glass are kept as clean as possible to enable them to be recycled; and moving Napier from a fortnightly to a weekly recycling pick-up.

The Joint Council Waste Futures Project Steering Committee (made up of councillors from both Hastings District Council and Napier City Council) this week considered the more than 6000 submissions that came out of public consultation on the draft plan, before deciding on recommendations.

Nearly half the 84,000 tonnes a year of general rubbish that is dumped by residents and businesses could have been recycled – if it was not mixed up with non-recyclable rubbish. Keeping recycling and organic waste out of the landfill will increase the life of the landfill and dramatically reduce the emission of greenhouse gases it produces.

“The sheer number of submissions shows just how passionate our people are about this issue,” said committee chairman and Hastings deputy mayor Tania Kerr.

“What has come out very clearly is that a large proportion of our residents are very keen for us to move more quickly to reduce rubbish, while taking into account the people who are already doing the right thing. We have also considered the needs of our elderly and infirm who MAY not be able to handle large bins.”

Almost 70 per cent of people who responded to a question asking what size wheelie bin they preferred chose the 80litre one at an estimated cost of $94 a year charged through rates. In Hastings the option would be slightly cheaper for those who currently used one 60L Council rubbish bag a week, while in Napier it would be about the same as now depending on the cost of the purchased rubbish bags.

If final sign off is given by both councils, the bins would be rolled out in mid-2020, which would allow time for alternatives to be set up for areas unsuited to wheelie bin pick-up, and for waste collection companies to put together tenders for the pick-up of the wheelie bins.

The mix of incentives would encourage people not to put green waste and recyclables in with their general rubbish, said Napier councillor and deputy chairman of the committee Annette Brosnan. “The aspirational goal is zero waste and getting there is about building good habits by encouraging those who don’t already recycle, while rewarding those who are already fully involved in diverting waste.

“Getting green waste out of general rubbish bins and increasing recycling by at least 20 per cent are very high priorities,” she said.

“Moving to a fortnightly general waste collection in the future will halve the amount again, however we cannot do that until sustainable product packaging increases, alongside our communities getting on board with our new waste diversion goals. The more effective our public education and engagement programme is, the sooner we can get to that stage in the plan.”

Mrs Kerr said one of the very real benefits of using wheelie bins would be that collection data could be much more reliably gathered, using new technology on the lifting trucks.

“We have worked hard to come up with solutions that reflect the wishes of our communities and are flexible and cost effective, while taking major steps towards our aim of limiting the amount of rubbish going into the landfill. Recyclable and reusable materials are a resource that should not be dumped into a hole in the ground and then covered with dirt,” she said.

Further initiatives that make up the Waste Management and Minimisation Plan include:

The full plan will be published in July, with Hastings District Council due to consider it in August and Napier City Council in September.