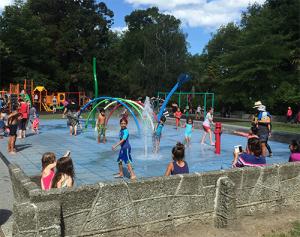 The historic walls and bridges in Cornwall Park, made from 1931 earthquake rubble, are a very special part of the park and will remain as a strong structural element.

A massive piece of play equipment that will have Hastings kids climbing high is being considered for Cornwall Park, as planning for a major upgrade of the district’s premier park get underway.

Just over $1 million was approved for the project in this year’s Long Term Plan process.

The focus will be on the playground area, doubling its size and including equipment for all ages, and linking it strongly with the John Holt Begonia House.

The draft plan shows a paved area between the new play area and the begonia house, suitable for the likes of food and drink carts. Chairs and tables will be available to be set out either on the grass or inside the begonia house, depending on the weather.

“Cornwall Park is one of our district’s most loved parks.  The playground is so popular with children that I often see them lining up for a swing or a slide,” said Hastings Mayor Sandra Hazlehurst.

“We all grew up feeding the ducks in the duck pond and sitting on the stone lion statues.  The expansion is incredibly exciting and we look forward to discussing our ideas with the community.”

The plan and all of its elements will go out for public consultation in August, before a final design is decided upon.

Areas within the park that will stay include the splash pad, playing fields, the grassed event space, Osmanthus Gardens, John Holt House, and the historic trees and stone bridges.

In order to accommodate the larger playground and for health and safety reasons, the draft envisages that a short length of the stream will be piped and grassed over, between the two historic bridges.

A new public toilet facility is included in the plans.

Before the draft plan goes out for public consultation, staff have asked playground equipment providers for quotes for key playground equipment. One of those being considered is a large state-of-the-art climbing frame which can be used by up to 120 children at a time.

Other parks to receive funding in the LTP include $4m for the redevelopment of Windsor Park but the planning for that has been pushed out after a decision was made to include Splash Planet in the overall plan. Windsor will be the last of the district’s four premier to undergo a major upgrade, with Flaxmere and Havelock North’s Village Green both redeveloped within the last 10 years.