New structure: Portfolios for each councillor 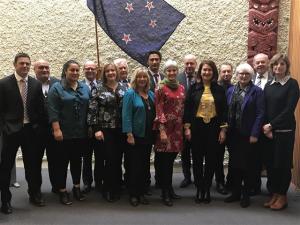 A new approach to serving the community has been launched at Hastings District Council, with each of the councillors being given responsibility for a particular focus area.

Hastings Mayor Sandra Hazlehurst has increased the number of councillor portfolios from four to 13, to enable each of the current councillors to take an active leadership role within Council.

Councillors have been appointed as ‘Portfolio Leaders’ to focus on the development of policy relevant to their portfolio, and oversee those particular areas from a governance perspective.

Mayor Sandra Hazlehurst says it became apparent the previous governance structure was no longer working for a number of reasons.  “Feedback I was getting from councillors was that the committee chairs bore a heavy burden of work; information was not being shared amongst all councillors; councillors wanted to be more fully engaged in Council’s work, and there was a perception of an ‘in-the-know’ group from within the councillor body.”

Mrs Hazlehurst says after researching models at other councils: “I wanted to create a more inclusive governance structure that engaged all councillors.  The new structure of having portfolio leaders will allow all councillors to be involved across the broad spectrum of Council activity – with particular links to our Annual Plan and Long Term Plan.

“It will empower councillors to improve their leadership skills, and be responsible for their part in the various functions of council.

“Portfolio leaders are a fairly new concept around New Zealand, with just a few other councils using them including Rotorua Lakes Council, and Wellington City Council.  I have looked at their structure of having portfolios and want Hastings to really benefit from having a similar system in place.”

Mayor Hazlehurst says Council has an enormous workload to implement over the coming years, with some of the largest roading, water and housing infrastructure projects ever undertaken.  “Making sure we have a councillor looking after each part of the organisation is really important.

The new Portfolio Leaders are as follows: