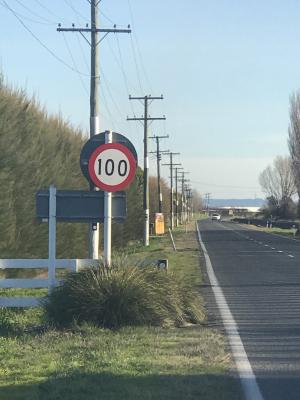 More minor changes to the Speed Limits By-law have been included, to match the detail in the bylaw with the existing on-road situation.
On August 1, road signs will be erected and any necessary road painting completed.
A five-week public consultation period on the speed limit review earlier this year attracted 785 submissions. In May, Hastings District Council considered the public input alongside crash records, consistency (speeds on nearby roads) and growing housing development in the targeted areas.
The speed limit review was requested by residents. “This has been very much driven by people asking Council to focus on road safety; particularly speed,” said Hastings mayor Sandra Hazlehurst.
“Some of our routes are just not suitable for speeds higher than 80kmh due to roadside hazards. In other places development has meant an increase in traffic and therefore 50kmh is a far more realistic limit.
“The information we based this review on came from our locals residents and we are pleased to have been able to address their concerns through such a comprehensive community-driven process.”
In the submissions, people asked that speeds on other roads be also considered, and those will form part of a future speed limit review, Mrs Hazlehurst said.