Vessel lifted off for upgrade 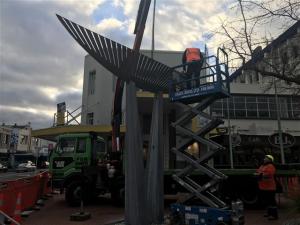 Up and away: The lift of the six metre long top of the Nikau Vessel in the middle of the city this morning [July 5] went off without a hitch.

The next step will be to remove the four metre tall ‘legs’ next week, depending on the availability of contractors.

The five metre high sculpture, by artist Virginia King, was installed in 2002.

It is undergoing a major overhaul which will see its plumbing and electrics upgraded, both in the legs and in the bowl. A new round in-ground plinth is also being constructed which should mean less issues with water spreading over the pedestrian area on windy days.

All the work has been approved by the artist.

It is expected that the rejuvenation will take about four weeks, after which the sculpture will be re-installed.