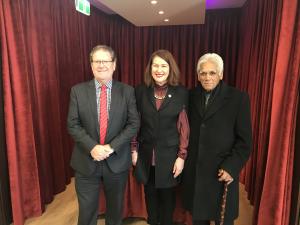 The new Hastings chapel has been blessed and officially opened today [July 6].

A crowd of about 100, including funeral directors and councillors, braved this morning’s frosty weather for the ceremony. It was presided over by kaumatua Jerry Hapuku and the mayors of Hastings and Napier, Sandra Hazlehurst and Bill Dalton.

The management of the facility, set in the Hastings Cemetery, is overseen by a committee of representatives from three councils: Hastings, Napier and Central Hawke’s Bay.

“Particularly the design; both the new layout, which is much more congregation-friendly, and the character – that we have been able to reflect the façade of the original building and have preserved features such as the original doors.

“That we have been able to display historic papers, placed in the walls by the builders of the original chapel nearly 80 years ago, was also remarked upon.”

Mr Dixon said the ceremony was very fitting. “This is a place of reflection and the celebration of the lives of loved ones we have lost. The beautiful new building with its glass wall providing a vista over the cemetery lawns and bringing in light is a special place in which to hold these very important and personal ceremonies.”

The original historic building was found to be earthquake prone in 2012. The need to replace it meant the less-than-ideal layout of the original could also be addressed and the capacity increased. The new building can comfortably fit 130 people (up from 80), with more able to gather on the adjacent covered outdoor deck. The layout allows all of the congregation to see the lectern during a funeral; not possible with the old T-section design.