Getting the best out of bridges 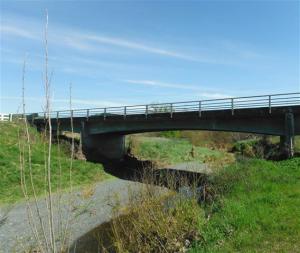 Work to bring Hastings’ bridges on important routes up to new load-bearing levels is getting under way this month, with Kawera Bridge on Taihape Rd the first on the list.

Taihape Road carries an average 1500 vehicles a day; 13 per cent of them heavy trucks which is about double that of other main routes.

Over a month from mid-November the 66-year-old 45 metre-long bridge will be upgraded to a level that will see it able to take trucks weighing up to 62 tonne. Carbon fibre ‘ropes’ will be bonded to the bridge deck to strengthen it.

Central Government updated rules for trucks this year, in line with its decision to increase height, width and weight maximums for trucks. Councils are required to advise by December 1, which routes are not suitable for the larger trucks and put signs on those bridges not able to these vehicles.

Hastings District Council has been consulting with industry and rural communities to assess which routes should be brought up to the new standards and therefore which of its 30 bridges need upgrading. Councillor Tania Kerr said having input from those who rely on the routes for moving farming and forestry product around and out of the region has been crucial. “Upgrading the bridges will cost a significant amount of money, so it is very important to ensure we identify the bridges that will bring us the most benefit, both to our communities and the economy.

“As we move forward to more detailed planning and then through the Long Term Plan process to fit the work into the budget, the most important thing will be good communications with the communities and industries involved. We are committed to that.”

Different bridges will receive different treatments, depending on their construction and the level of load they are expected to carry.

The New Zealand Transport Agency website says the small increases it has made to vehicle size limits will not mean there will be noticeably bigger trucks on the roads but will increase road safety by reducing the number of trips required. “The changes are expected to support safety outcomes because operators will be able to carry more with fewer trips, reducing the exposure of other road users to heavy vehicles for some freight tasks.”

An early estimate of the cost of bringing 18 of the district’s bridges up to a level that will allow larger loads, plus investigating the strengthening of bridges on other routes, is about $10.3 million over a suggested seven years. However that should be off-set by an NZTA contribution of 54 per cent. While a start on the bridge upgrades is being made using existing bridge funding, the bulk of the projects will go through next year’s Long Term Plan process for consideration.