Any business that wishes to discharge trade waste that exceeds any of the limits in Schedule B of Chapter 7 of the Bylaw must apply for an approval to discharge controlled wastewater.  Approval must be obtained before starting the discharge.  The approval will state what characteristics the business is allowed to discharge.

Any trade waste discharge that is within all limits of Schedule B of Chapter 7 of the Bylaw is considered a permitted discharge and does not require approval to discharge controlled wastewater however, depending on individual circumstances, the discharge could be subject to trade waste charges.

Why do we need to control what is discharged?

Why do we need to control waste discharged from food businesses?

Food related businesses such as takeaway shops, restaurants, butcher shops, cafes, bakeries etc – in fact any business that processes food on the premises - is likely to discharge oil and grease (fat) into the wastewater network. If oil and grease is discharged in excessive amounts it can solidify and cause sewer blockages, resulting in overflows, hazards to public health and pollution of the environment.

The most common method of pre-treatment for these types of businesses is a grease trap.

What about mechanical workshops, service stations and truck washes?

These types of businesses will have oil and fuel that gets washed off mechanical parts, equipment or vehicles, or sometimes small spills happen.  Oil and fuel is referred to as petroleum hydrocarbons in Schedule B of Chapter 7 of the Bylaw.  The most common pre-treatment for wastewater from these types of businesses is an oil and grit interceptor.  The oil floats to the top and the grit settles to the bottom of the interceptor.  The interceptor must be of the right size for each situation and it must be emptied regularly to ensure it works properly.

How does Council know if everyone is following the rules?

All holders of an Approval to Discharge Controlled Wastewater have to take regular samples of their discharge.  The samples are analysed by an approved laboratory and the results sent to Council’s trade waste officer for monitoring.  The officer also does random monitoring of discharges to verify if it is within approved limits.

The trade waste officer also carries out random inspections of permitted discharges and responds to reports of blockages from Council contractors who do maintenance work on the sewers and clear blockages as they occur.  When a problem is identified it is dealt with as explained in this document.

How much oil and grease can be discharged under a permitted discharge?

The reason for the low allowable level is due in large part to how flat the city of Hastings is. Our wastewater system does not have many hills to run down, so wastewater flows more slowly and is therefore at more risk of build-up of grease in the pipes.

What about petroleum hydrocarbons?

The maximum amount of Petroleum hydrocarbons that anyone is allowed to discharge is 30mg/L of wastewater.  This equals only 30 grams per 1000L of wastewater.

What happens if a permitted discharge contains more oil and grease than allowed?

Discharging more oil and grease than is allowed in the bylaw is an offence. Any trade waste discharge that does not comply with Schedule B of Chapter 7 of the Bylaw must apply for an approval.

If Council becomes aware that a previously permitted discharge has changed in nature and has in effect become controlled wastewater then staff will work with the discharger to bring the discharge into compliance. One way Council may become aware of a change in the discharge is a blockage of the sewer, traced back to that specific discharge.

What happens if a business causes a restriction or blockage in the wastewater system?

What is a grease trap?

The most common grease trap design is simple non mechanical device that captures the oil and grease that is present in the wastewater generated by the business.  The trap is, in most cases, installed in the ground; it has an inlet, an outlet and baffle walls which separate the unit into a number of chambers. In the chambers, solids settle forming a sediment layer, with most of the oil and grease floating to the top.  Some grease traps can be installed above ground which can make it easier to install in some situations. 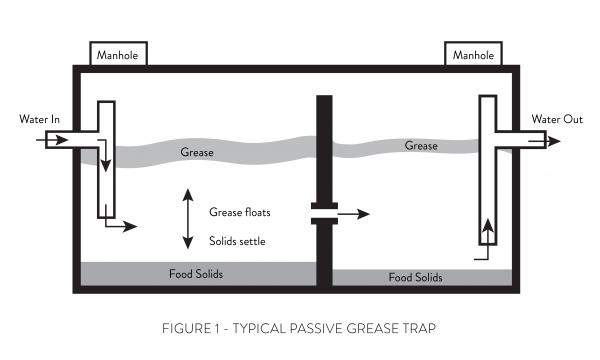 What can a business do if there is not enough room to install a typical grease trap – are there alternatives?

There are some alternative grease removal systems available.  The business can install a different system that can be installed inside the building. It is important that the system is correctly sized for the discharge volume and operated according to manufacturers or suppliers instructions.

Installing a grease trap or another type of grease removal system that is too small for the volume of wastewater is likely to result in a significant amount of the oil and grease flowing through the system and entering the wastewater system, resulting in a discharge that does not comply with Schedule B of Chapter 7 of the Bylaw.

If a business is using an alternative grease removal system (other than typical grease trap) then any dishwashers should be plumbed in after the grease removal system because the heat of the water and the washing agent used is likely to adversely affect the operation of the system.  This is particularly important if using an enzyme-based grease converter system.  It is best to discuss this with the service agent of the system or, for new installations, the supplier before choosing a system.

What size of grease trap is needed?

What size alternative grease removal system is needed; is it different from a typical grease trap?

The size of an alternative system is very different from a typical grease trap and Council has no specific recommendation for the type of system or size because it is different for each situation.  The best way to proceed when choosing a system is to talk to the various suppliers and get them to work out the specific requirements for the discharge.

Does the grease trap or a grease removal system need to be maintained?

Yes. Regular emptying and cleaning is critical to correct and effective operation of the systems.

When does a grease trap need to be emptied and cleaned?

Some businesses engage a contractor to empty and clean the trap on a regular schedule.  The frequency can be established with the contractor based on observation of the condition of the trap over a period of time or by monitoring the grease trap to establish when it needs cleaning. The frequency of cleaning will vary based on the size of the trap and the amount of oil and grease generated by the business but, as a general rule, when approximately 25 per cent of the working depth of the trap is taken up by the layer of solids, floating oil and grease layer, the trap should be emptied. Once the trap has been emptied and cleaned it should be filled with cold water to ensure proper operation. At the time of cleaning the trap should be checked for any faults.

For all alternative grease removal systems, the manufacturers' and installers' instructions must be followed to ensure proper operation of the system.  Some councils in New Zealand have banned the use of some systems because they have been proven to be unreliable when not used according to manufacturer’s instructions.  Hastings District Council has not placed a ban on any alternative grease removal system because if a problem does occur then it can be dealt with under the bylaw.

It is important to reduce the amount of solids (food scraps) entering the grease trap or grease removal system. This can be achieved by installing easily cleanable screens that remove most solids before the wastewater enters the traps.

What happens if the grease trap or an alternative system is not emptied and cleaned regularly?

The trap stop working as it is designed to do and in some cases will block and cause overflow on the premises.  In other cases it will still allow the wastewater to flow through untreated. The discharge of excess oil or grease (fat) may result in a blocked sewer.  Discharging wastewater containing any characteristics in excess of what is allowed in Schedule B of Chapter 7 of the bylaw makes the discharge controlled wastewater and must have approval for discharge.  To discharge controlled wastewater without approval is an offence under the bylaw.

Can a business use a waste grinder to dispose of food scraps?

Who needs to install a grease trap or alternative grease removal system?

In the Acceptable Solutions G13/AS2 clause 3.4.2 (as seen earlier in this document) it is stated: 'In buildings other than housing, grease traps shall be provided where waste water is likely to convey grease'.  This means that most food-related businesses building new premises or making alterations to their premises or any work that requires a Building Consent, must install a grease trap or alternative system to comply with the Building Act.

Why does Council recommend much bigger grease traps than The Acceptable Solutions G13/AS2 stipulates?

A business can comply with the Building Code by installing a grease trap that is sized according to the code. However, the grease trap sizes in the code would not be effective enough to meet the limits allowed in Council's bylaw, therefore making the discharge controlled wastewater, therefore requiring specific approval.  To discharge controlled wastewater without approval is an offence under the bylaw.

Can a business install a smaller grease trap than recommended by Council?

There are some things that need to be considered when working out the size of grease trap needed for each situation; particularly calculating the volume of water discharged from the operation and the retention time in the grease trap.  As a general rule, the water should have at least one hour retention time to allow it to cool down to allow the grease to separate and float to the top and any solids to settle to the bottom.  The sizes recommended by Council are pretty much fail-safe sizes for the operations mentioned for each size and calculating the discharge volume is not needed.  If calculations are done and prove a smaller grease trap is enough then Council would accept a smaller trap being installed.

However, while smaller is generally cheaper at the start, the system will need to be cleaned more often, costing more per year to maintain and the amount of oil and grease in the wastewater discharge is more likely to have higher-than-allowed limits, resulting in non-compliant discharge, which is an offence under the bylaw.

If a business has already got a small grease trap does it need to install a bigger one?

If the nature of the discharge has changed (increase volume or oil or grease) then the short answer is yes. Consistently good housekeeping may keep the discharge within allowed limits even with a small grease trap; the question is: Can the business do the right thing all the time? Is it worth taking the risk of committing an offence under the bylaw?