Sections coming on as Hastings grows 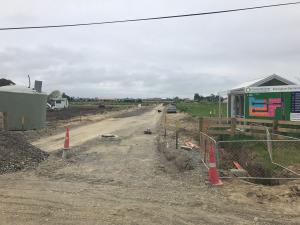 Residential sections are coming on line – in both small and large scale developments.

More than 50 residential sections are in the process of being developed in small scale subdivisions across the district, with approval given to land owners for another 80.

How quickly those sections come to market will depend on the owners and developers.

Closer to market are the remainder of sections in Lyndhurst Stage 1, an estimated 30 sections.

Lyndhurst Stage 2, with an estimated 270 lots, is on the way, with Hastings District Council starting on infrastructure in Lyndhurst Rd in November. That will see storm water, sewer and drinking water pipes, as well as power and telecommunications infrastructure, installed over about five months.

Looking further into the future, there are two subdivisions going through resource management processes, Iona in Havelock North and Howard St in Hastings. Between them they would be expected to yield near 500 sections.

“There is a good mix of new subdivisions, rural lots and infill subdivisions out there and more on the way,” said Council’s economic development and urban affairs committee chairman Damon Harvey.

“Over the last 24 months the real estate market in Hastings has markedly changed and we have had a lot of feedback from residents and developers saying there was a shortage of sections. I think we can see that the on-going rezoning work by Council is bringing more sections to the market in both the short and the long-term.

“Council has limited options as in the end it is up to landowners and developers to decide when they want to sell their property but we have worked very hard to process consent applications in the most efficient way we can, and to plan infrastructure in a way that enables development where it is of most use.”

All development in Hastings and Napier is guided by the Heretaunga Plains Urban Development Strategy (HPUDS) which has been in place since 2010 to protect the region’s growing soils from uncontrolled urban spread.