Selwyn Rd in Havelock North is named after Major Selwyn Chambers, C Squadron, Wellington Mounted Rifles. He was a respected farmer, chairman of the Hawke’s Bay Farmers Union and a major in the Territorial Force Image of Major Selwyn Chambersbefore the war. He served bravely and was killed in action at age 28. 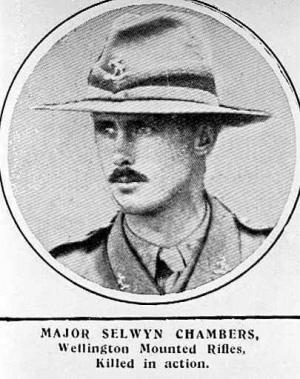 The Chambers family were well known sheep farmers in the Havelock North area. The 1911 and 1914 electoral roll records record the address of Selwyn Chambers as Kopanga and his occupation as sheep farmer.

Tauroa Station was divided in 1909 when Selwyn Chambers purchased a 3000-acre block from his father and named it 'Kopanga'.

Selwyn was married to Violet Amelia Hall of Springlands on the 14th December 1910 at the Church of the Nativity in Blenheim and they had a son, Russell Mason Chambers, born 22nd February 1913.

A ferro-cement homestead was built on Kopanga station in 1914 by builder Eric Philips of Havelock North to the design of Napier Architect J Louis Hay. Photographs of the building process were taken and show substantial reinforcing; the house survived the 1931 Hawke’s Bay earthquake virtually undamaged. Selwyn oversaw the construction himself, but due to the war did not get to see it completed.

Major Selwyn Chambers, acting lieutenant colonel at the time, was killed in action at Table Top during the battle of Suvla Bay, Gallipoli on 7th August, 1915, aged 28. He was buried at the old No.3 outpost he had defended in May. The grave markers for Selwyn and Major Elmslie are no longer in evidence. Violet never remarried after Selwyn’s death.

His widow Violet and son Russell lived in Tauroa and other family members occupied the house after the war, until some years later when Russell was older and moved in. The house is situated on Kopanga Road.

Many of the Chambers family still live in the local area, and grandson Neil Chambers who lives at Kopanga in the homestead build by his grandfather Selwyn, has been consulted on this story and supplied access to family records.

In a meeting dated 8 June 1917 the (then) Havelock North Town Board accepted the dedication of names for two new roads located within the Duart Estate. The new road names were Nigel Street and Selwyn Street and T. M. Chambers was consulted about the road naming. Thomas Mason Chambers was Selwyn Chambers’ father and Nigel McLean’s uncle, he had been chairman of the Havelock North Town Board from 1912-1916. Selwyn’s cousin Nigel McLean had fought with him in the Wellington (East Coast) Mounted Rifles and also died of wounds a few months after Selwyn, at Gibraltar.