Hawke's Bay is in the orange traffic light setting of the Covid-19 Protection Framework. Click here to learn more about how Hastings District Council facilities will operate at orange. Read more »
Keyword: #waipatikibeach 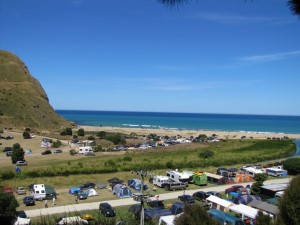 Waipatiki Beach, 11km from SH2, north of Napier, is a picturesque settlement with native bush and a broad stretch of golden sand. Near the beach are a camping ground, picnic area and public toilets.

The name Waipatiki means "water . . . sand flounder", so called because it was once an estuarine valley that was a very good place for early Maori to catch these fish, before the 1931 Earthquake lifted the flats and a stream system formed.

The long steep decent to the valley brings you to the Waipatiki Scenic Reserve, a 64ha remnant of coastal bush with nikau palms dominating the lower flat while kanuka and a wide variety of larger native trees cover the hillside. Tui and native pigeons are plentiful. Within the scenic reserve, traces of the original pre-European foot track, which connected Napier to Wairoa, still remain. By 1860 this had been enlarged to become a bridle track, which pack trains used for nearly 40 years. By 1900 a dray road had been constructed inland via Tutira and the coastal route fell into disrepair.

Waipatiki Domain, a smaller native bush area, had been in danger of being eaten out by goats and possums, but with fencing and predator control the native bush has regenerated.

Over six weeks in summer, from mid-December to near the end of January, surf life savers patrol the beach, from 11am to 6pm, seven days a week.