All of New Zealand is at the orange traffic light setting of the Covid-19 Protection Framework When you are inside any public areas of any Hastings District Council facility (excluding our pools in Flaxmere and Clive) you are required to wear a mask. Click here to find out more about Life at Orange. Read more »
Keyword: #crestandlogo

The Hastings District Council Achievement of Arms (or Coat of Arms) was unveiled in 1993. It is Council's official symbol. 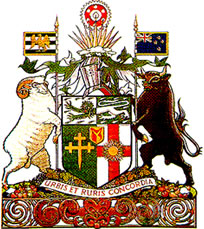 It combines the charges (symbols) from the Arms of each of the three local bodies amalgamated in 1989 to form the Hastings District Council.

The lion and fern leaves are from the Hastings City Council Arms, the cross from the Havelock Borough Council Arms, and the carved cross and sun was the principal charge in the Arms of the Hawke’s Bay County Council.

The red manche (sleeve) on a gold field comes from the Arms of Warren Hastings, after whom Hastings is named.

The helmet is a closed esquire’s helmet always used on Civic Arms.

The Crest, Supporters and Compartments symbolise the products and industries of Hawke’s Bay.

The Crest on the helmet represents a sunburst emanating from clouds, symbolising the light, warmth and moisture which combine to provide the fertility of the Hastings district. The sun’s rays support a toothed wheel, symbolising the industries of the region which depend on this fertility.

The Supporters, a ram and a bull, represent the two main animals on which the prosperity of the district is based, They are white and black, the colours of Hawke’s Bay.

The Compartment panel is carved with a Maori pattern, paying tribute to the contribution of the foundation residents of the region. That panel supports a profusion of fruits including grapes, apples, pears and peaches. Miro berries and leaves are included because of their importance to the original Maori population.

The black and white horizontally-striped flag is in the provincial colours, anchoring the Arms in Hawke’s Bay. The gold Hawk rising is from the Arms of Lord Hawke, whose name the province bears. The New Zealand Ensign places the Arms in New Zealand.

Per pale Vert and Argent, in dexter a cross-crosslet fitchy Or (for Havelock North Borough Council); in sinister, on a cross carved with a Maori pattern Gules, a sun in splendour Or (for Hawke’s Bay County Council); on a chief party per pale Argent and Vert, a lion passant guardant, armed and langued Gules within an orle of fern leaves all counterchanged (for Hastings City Council). An inescutcheon Or charged with a manche Gules (for Warren Hastings).

On a wreath of the colours, clouds Argent, rays Or, a sunburst supporting a toothed wheel, perforated of six, centred and rimmed Argent, Gules.

Dexter, a ram, tail couped, horned and hoofed Or, proper, supporting on a staff proper palewise flying to the dexter an ensign Sable, two bars Argent edged and charged with a hawk rising Or (for Hawke’s Bay and Lord Hawke).

Sinister, a bull, armed and hoofed Or, supporting a staff property palewise flying to the sinister, edged Or, a New Zealand Ensign; all supported by a profusion of apples, pears, peaches, grapes and miro berries with their leaves, surmounting a Maori style carved panel representing Rongomatane and Haumiatiketike, all proper.