Crichton Pl is one of four adjoining streets in the suburb of Anderson Park in Havelock North named after Victoria Cross winners. 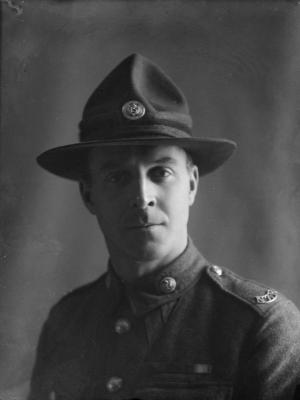 James Crichton was born on 15 July 1879 in Carrickfergus, county Antrim, Ireland. His father was William Crichton and his Mother was Elizabeth (Bell) Crichton. He was one of six children, alongside siblings William, Robert, Mary, David and Sarah. He moved with his family to the hamlet of Northrigg, Lanarkshire, Scotland when he was a young boy. At the age of 10 he was working in the mines with his father.

When the Boer (South African) war broke out James enlisted in the British Army in the regiment of the Cameron Highlanders.

Shortly before the outbreak of World War 1 James immigrated to New Zealand and settled in Auckland taking up work with the Post and Telegraph Department as a cable joiner.

When World War 1 broke out in 1914 James enlisted in the New Zealand Army at the age of 35.

At the end of September 1918 James became the last New Zealand soldier in World War I to win a Victoria Cross (VC). (Citation below)

James Crichton was an unusual soldier and in April 1918 after serving with the first field bakery in Gallopoli and France, he requested to transfer to an infantry unit. Although he was nearly 40 years old he gave up his rank of warrant officer to join the 2nd Auckland Battalion as a private. He was promoted to sergeant before the war ended.

During the crossing of the Scheldt River near Crevecoeur, James Crichton’s platoon ran into serious trouble. It became trapped on an island in the middle of the river when German machine gun fire swept the stone bridge leading from the island, killing several men including the platoon commander and senior NCO. To make matters worse the bridge had been prepared for demolition with explosives and mines. The platoon needed to communicate the desperate situation back to company headquarters.

Despite having been wounded in the foot by machine gun fire, Private Crichton volunteered for this dangerous task. He swam the river fully clothed, hauled himself up onto an exposed bank in full view of the Germans and sprinted over the 100 yards of broken ground to report to company headquarters. As if this wasn’t enough, he then returned back to the isolated platoon, carrying the company commander’s message to 'hold on'.

On his own initiative Crichton then located the explosive demolitions and although under fire from machine guns and snipers, he managed to remove the fuses and detonators, which he put in his pocket; the explosive mines he placed in the water. Crichton was then told to report what he had done to the company commander so he completed the dangerous trip a third time. He was about to rejoin his platoon when the company commander ordered him to remain at headquarters. While at the company headquarters Crichton helped the stretcher bearers there with their heavy loads until the pain of his wound became too obvious. He was then sent, under protest, to a field hospital.

As a result of these incredible actions James Crichton was recommended for the VC. Four eye witness statements supported the recommendation, the one written by Captain James Evans outlining Crichton’s actions:

“I consider he [Crichton] showed the greatest courage in crossing the ground to deliver his messages as others were killed or wounded doing the same and I would not allow men to cross it”.

The recommendation was successful and duly gazetted on 12 November 1918.

James Crichton was discharged from the New Zealand Expeditionary Force in September 1919 with his final medical report saying he was no longer fit for service on account of wounds received in action. Crichton returned to his pre-war career as a cable splicer and in 1919 married war widow, Amy Watkins (nee Howe). James and Amy raised two daughters, Hazel and Velda. Neither of the girls married.

Hazel and Velda realised the unique value of the medal (VC) and after his death preserved it for future generations by donating it to the Auckland War Memorial Museum.

In 1937 at age 58 James was in London, a sergeant in the NZ Coronation Contingent for the coronation of King George VI.

James died in 1961 at Takapuna aged 82 and is buried in Waikumete Memorial Park Soldiers Cemetery Auckland.

While the Council minutes do not show the discussion or reasons, there is a high degree of confidence that Crichton Pl was named after Victoria Cross (VC) Winner James (Scotty) Bell Crichton.

For most conspicuous bravery and devotion to duty when, although wounded in the foot, he continued with the advancing troops despite difficult canal and river obstacles. When his platoon was subsequently forced back by a counter-attack he succeeded in carrying a message which involved swimming a river and crossing an area swept by machine-gun fire, subsequently rejoining his platoon. Later he undertook on his own initiative to save a bridge which had been mined, and, though under close fire of machine-guns and snipers, he succeeded in removing the charges, returning with the fuses and detonators. Though suffering from a painful wound he displayed the highest degree of valour and devotion to duty.