Hawke's Bay is in the orange traffic light setting of the Covid-19 Protection Framework. Click here to learn more about how Hastings District Council facilities will operate at orange. Read more »
Keyword: #poppyplaces 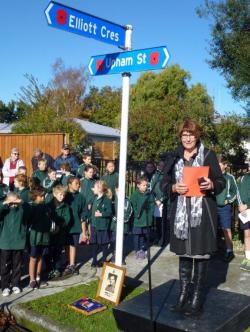 Over the last 100-plus years, hundreds of thousands of New Zealand soldiers have been called to war in foreign lands.

Many died in those conflicts (30,000 in the two world wars alone) and the nation mourned, going on to commemorate their sacrifice in various ways including naming streets or buildings after them, planting trees in their names, and erecting monuments.

The national Poppy Places project is about ensuring we never forget. The genesis of the project is in knowing that many of our street names and places are directly related to people and events from overseas military history. Often, after all this time, the details are known to only a small and shrinking number of people.

By using the Poppy (an internationally known symbol) to mark these places, those who pass by will be reminded of their sacrifice.

Find out more about the National Poppy Places Project.

In Hastings, the following streets are among those to have been recognised as Poppy Places and have their stories recorded: Further streets identified, for which research is yet to be completed, include:

Some Hastings streets are named for battleships. About 7000 New Zealand officers and ratings served with the Royal Navy for varying periods during WWII. New Zealanders saw active service in ships of every type from battleships and aircraft-carriers to submarines, motor-launches, and landing craft and in every sea from Spitzbergen in the Arctic to Cape Horn and from Iceland to the shores of Japan. They took part in every major naval engagement or operation and in countless minor actions, as well as in the ceaseless patrols and sea drudgery that make up so great a part of naval warfare.