Hawke's Bay is in the orange traffic light setting of the Covid-19 Protection Framework. Click here to learn more about how Hastings District Council facilities will operate at orange. Read more »
Keyword: #RussellStreet

The naming of Russell St after (Major General) Sir Andrew Russell is confirmed in the books Swamp to Centenary. A History of Hastings, and City of the Plains, A History of Hastings. The latter notes: " . . . the cenotaph, erected on land purchased . . . for a civic square . . . faced an extension of Station Street, re-named Russell Street to honour Sir Andrew Russell who became national president of the RSA" from 1921-1924 and again from 1927-1935. 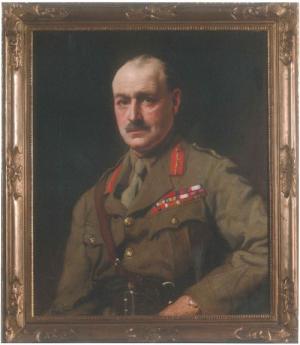 Major General Sir Andrew Russell earned a high reputation for his tactical skills, insistence on strict discipline, care for his men and his personal courage. Under his leadership, the New Zealand force was regarded as one of the finest in the allied army and fought with distinction in the major battles of WWI: Messines, Passchendaele and the Battle of the Somme. His contribution was recognised with decorations bestowed by France, Belgium, Serbia and Montenegro, as well as Britain. On returning to New Zealand after the war he was given a hero’s welcome at Wellington where he was hailed in Maori “Ariki Toa” - the fighting chief sent forward to lead.

Andrew Hamilton Russell, known to his family and friends as Guy, was born in Napier in 1868. His father, Colonel A.H. Russell, having come to New Zealand as a soldier, left the army to take up farming in Hawke’s Bay.  Andrew Russell's early childhood was spent at Redclyffe, near the Tutaekuri River, west of Taradale. His education was in England at Twyford preparatory school and Harrow.

From Harrow, Guy went on to the Royal Military College, Sandhurst, entering as the cadet with second highest marks. He left a year later in 1887, with the Sword of Honour awarded to the top cadet of the year. Five years of service with the British Army serving in India and Burma in the 1st Border Regiment with the rank of Lieutenant followed, after which Guy resigned his commission and returned to New Zealand.

He followed his love of farming as a cadet, then manager and finally owner of the family land at Twyford and Tuna Nui (near Sherenden). In 1896 he married Gertrude Williams, the daughter of J.N. Williams of Frimley. Together they raised a family of two sons and three daughters. In 1912/13 they built the Homestead at Tuna Nui, designed by architect C.T. Natusch.

Throughout these years, Guy maintained a strong interest in military and defence affairs. From 1900 he was a territorial officer in the New Zealand Army. He raised the Hawke’s Bay Mounted Rifles, a volunteer force, and was promoted to major under the volunteer system. The Defence Act of 1909 brought in the Territorial system, the rapid expansion of the New Zealand Defence Force, and compulsory military training. The Wellington Mounted Rifles Brigade was formed in 1911 and Guy was given command with the rank of colonel.

Sir Andrew Russell’s abilities were such that he was put in charge of the ANZAC Rear Guard during the final 48 hours of the highly successful evacuation from Gallipoli. The evacuation was meticulously planned to create the impression of on-going work and reinforcements arriving, even while evacuation was underway by night. The final 20,000 troops were withdrawn by ships over two nights, with diversions in place such as self-firing rifles (rigged with water dripping from one tin into another to pull the trigger) to ensure the Turks didn’t move up and attack the troops in their vulnerable embarkation points.

The only casualty was a slight wound by a stray bullet to a rifleman’s ear. Following this campaign Sir Andrew Russell was awarded the KCMG, promoted to the rank of major general, and made commander of the New Zealand division which was sent to fight in France and Belgium under British command.

Back in New Zealand, civilian life was busy not only with his own farming business but also the wide variety of organisations he was involved with, which show the breadth of his interests and indicate the esteem in which he was held. He was a founding member of the Round Table in New Zealand, a member of the Rhodes Scholarship Selection Committee, and a board member of both The Hawke’s Bay Farmers’ Co-operative Association of Barraud and Abraham, and Flock House agricultural training establishment. He belonged to the British Empire Service League, the international charity Toc H, The British Israel World Federation and The Farmers Union, to name a few.  In WWII he was inspector general of troops from 1940 - 1941, and a member of the War Council.

A dedicated family man with high intellect and strong Christian beliefs and firm principles, Sir Andrew Russell stands as an example to all who follow.

He died at Tunanui in 1960 at the age of 92 and was farewelled with a full military funeral at St Matthews's Anglican Church in Hastings. His name is on the Hawke's Bay District Club Roll of Honour.

At a meeting of the (then) Hastings City Borough Council on 10 March, 1921, it was agreed that Station St be renamed Russell St. While the Borough Council records showing the reasoning behind the renaming have not been retained, it is clear given the timing, 1921 just after the war, and the location, adjacent to the new Hastings war memorial, that Russell St was named in honour of the distinguished son of Hawke's Bay, Major General Sir Andrew (Guy) Hamilton Russell, KCMG.