The Amazing China-Hastings Year of Tourism is part of the national China-New Zealand Year of Tourism 2019. It builds on Hastings’ already very strong trading and friendship relationships with China. The project gives our high school students the opportunity to learn much more about China and win trips to that country, while also increasing the people of China’s awareness of our fantastic district.

What's it all about The project is designed to cultural understanding and relationships between the two countries, expanding tourism and trade opportunities. For Hastings, it is about raising our district’s profile, encouraging Chinese tourists to visit our beautiful area while they are in New Zealand. It builds on the already strong friendship Hastings has with China, including the first New Zealand-China sister-city relationship, with Guilin, now almost 40 years old.

ACHYOT is the latest in the series of China-focused competitions run in Hastings over the last two decades, most recently the Amazing China Face Races.

How does it work

Regions and cities across China have been invited to participate in the ACHYOT. So far more than 20 have registered. The next step will see Hastings send each of the participating areas a small treasure chest holding a gift from Hastings, kindly donated by the Hawke’s Bay Woodturners Guild.

In return, the cities and regions in China will send a chest to Hastings, holding something that uniquely represents their region. Those chests will remain unopened until early 2020, when our high school students will be challenged to match the gifts to their home region in China. (The competition date has been selected to fit in with college timetables.)

The first three students to correctly match all of the gifts to their home region will win the trips to China.

What has happened so far The project has been officially launched both here and in China, the latter at the New Zealand Embassy in Beijing. More than 100 dignitaries and sponsors as well as representatives of eight national media from across China gathered at the embassy for that launch.

Photos  and video of the best of Hastings have prominently featured in The Beijing News and the Global Times, on Hainan Television and the Global Travel Channel, and across Chinese social media.

Just prior to the Beijing launch, project director Councillor Kevin Watkins personally met China’s Minister of Culture and Tourism, Mr Luo Shugang, during Mr Luo’s recent visit to Wellington, New Zealand. He was very impressed, and expressed his desire that it be a success.

ACHYOT is also officially supported by New Zealand Minister of Tourism Kelvin Davis, Tourism New Zealand, and The Ministry of Business, Innovation and Employment. It is part of the China New Zealand Year of Tourism 2019, an initiative agreed to by the Chinese and New Zealand governments in 2017. Masks a gift from Hastings’ friends in China China competition delayed due to coronavirus

A decision has been made this week to delay the Amazing China-Hastings Year of Tourism competition, given the uncer... The first of the gifts that are the heart of the Amazing China-Hastings Year of Tourism secondary school competitio... The first of the treasure chests sent to cities and regions in China for the Amazing China-Hastings Year of Tourism... Treasure chests blessed and off to China

The gifts being sent far and wide across China for The Amazing China-Hastings Year of Tourism 2019 have been blesse... The first of the treasure chests holding hand-made gifts by talented Hastings craftsmen are about to be sent to the... Hastings has been in the top five New Zealand cities covered by China’s largest news agency, Xinhua, over the pas... No-one was more surprised to see a massive tourist bus in Guilin, China, clad in picturesque views of Hastings, tha... Photos and videos of Hastings have spread far and wide across China over the last two days, after the Beijing launc...

Art shout out for treasure chest

The Amazing China Hastings Year of Tourism project is well under way, and the next step is to send each of the part... The official launch of a “first-in-the-world” project will be held in Beijing in two weeks. The China Hastings ... Getting to speak with China’s Minister of Culture and Tourism Luo Shugang to explain the massive project Hastings... Hastings aboard Year of Tourism in a BIG way

A fantastic “first-in-the-world” year-long project has been launched in Hastings – starting with an exchange ...

The swamp kauri used to make the plinths for the hand turned bowls that are the primary gift in the treasure chests bound for China is more than 50,000 year sold.

The age testing was done at the Rafter Radiocarbon Laboratory, the oldest continuously operating radiocarbon dating laboratory in the world. The Lower Hutt lab specialises in radiocarbon measurement which is used for a wide variety of applications – from dating the age of earthquake fault ruptures to determining fossil CO2 emissions into the atmosphere and verifying the authenticity of archaeological antiques. The lab has an international reputation for the quality of its work and has dated more than 60,000 samples since opening.

All living things contain the element carbon. Carbon is ingested by plants through photosynthesis and by humans and animals through the consumption of plants, water and air. Carbon occurs naturally in three forms (isotopes): Carbon-12, Carbon-13 and Carbon-14 (14C). Carbon-14 is a rare type of carbon atom that is radioactive, meaning it decays and “breaks down” over time.  While an organism is alive it maintains a constant amount of radiocarbon in its body but when it dies the radiocarbon “stored” in the organism starts to decay away.

In the lab, samples are treated to remove contamination and then undergo various chemical processes. These processes convert the carbon of the sample into the form of pure graphite so that the radiocarbon content can be measured. A machine called an accelerator mass spectrometer blasts the sample through magnets which separate and measure the amount of radiocarbon remaining, from which the time passed since the organism died is calculated. 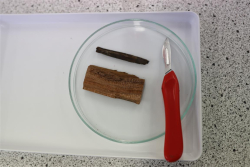 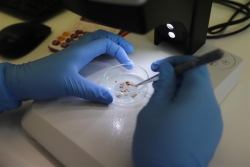 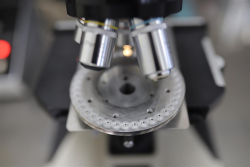 Hastings District councillor Kevin Watkins (New Zealand) has long had a strong interest in developing cultural and economic ties between Hastings and China.

The first formal ties between the two cities date back to 1981, when Hastings and Guilin City signed the first China New Zealand Sister Cities protocol. To celebrate the 15th Anniversary in 1996, a very beautiful and traditional Chinese Osmanthus Garden was built in Hastings’ premier Cornwall Park.

Councillor Watkins has been the organiser of the annual Lighting of the Guilin Osmanthus Garden event for the past 10 years, and the organiser of four innovative and world-leading competitions focused on building relationships between our two countries. Three of these have won top national awards.

In this competition Hastings secondary school students needed to solve clues to find and identify two young women in urban Guilin. All the students had was a photo of the two young women.

The aim of the project was to build relationships between Hastings, New Zealand, and our sister city Guilin, in China. The project challenged the students to interact directly with people in Guilin by way of all available media to find the women and, during that process,  they learned much about Guilin history, culture, geography, tourism, education and more. The two young  woman, were found and identified.

This was a very successful first project, which was much enjoyed by the students and our Chinese guests. It attracted excellent media interest. The two young Guilin women coming to Hastings, and the Hastings winners of the competition travelling to Guilin.

Again, Hastings secondary students needed to solve clues, this time to find a young man and a young woman, located somewhere in rural or urban Guilin (population at that time around six million people).  After an exciting and very challenging time, the young couple was located and identified. It was then revealed that this young couple were planning to marry. To the delight of the Hastings public, they were invited to Hastings for an all-expenses paid wedding and honeymoon.

This highly publicised competition built on the success of the 2006 version, further strengthening ties between Hastings and our sister city Guilin.

The media interest in this competition was far greater than for the first, with, of course, a great deal of interest in the wedding. News media from across New Zealand reported on this wedding, including television. A film documentary team from China Travel Channel arrived and filmed the wedding and televised a wonderful two-part documentary on television in China.

This  project was designed to further test the mental skills of Hastings students, this time tasked with solving a puzzle that everyone said was impossible.

The aim of the project was to create a ‘World First’ competition that would catch the media interest both in New Zealand and in China; a project that would see our students research every province in China as they raced to identify and locate one ‘face’ among 1.35 billion Chinese people. There first clue was a photo of the ‘face’. As they solved further clues, the students learned a great deal about China’s history, its dynasties, cultures, ethnic diversity, vast geography, old cities, emerging new cities, politics, and industry.

This was a hugely successful  project, which was much enjoyed by the teachers, students and our Chinese guests. The ‘face’ chosen was a young woman from Beichuan, Mainyang, who had experienced and lost so many of her family in the Great Sichaun Earthquake of 2008. This young lady’s story moved everyone to tears when she shared her experiences during her visit to Hastings after the competition. There was immense media interest both in New Zealand and China in this project, including Mianyang TV.

This project won the top New Zealand Sister Cities Award, with the judges saying it was the finest project they had ever seen.

This time, the project challenge had a further twist. The students’ task was to find one person within China without knowing the gender, or seeing the photo of who they were searching for until they had correctly located the province in which that person lived. A complex set of clues were given daily to the students which had them eliminating provinces one by one in which this ‘face’ would not be found. Eventually one province was left and a photo of the ‘face’ revealed. From then, the students had to use all their skills and intelligence to be the first to locate and identify this young lady. The young lady was found, and we are still waiting for her to be able to take a holiday from her work so she may visit Hastings. She has a very moving life story to share with us.

As with previous projects, the aim was to build understanding and knowledge of China within our secondary school students. Record numbers of students entered the competition, and the winner, a very happy Caitlyn Thomas, toured Shandong province in September, 2018.

Again, this project attracted unprecedented media interest across both New Zealand and China. It is yet to be entered into national awards.

While these competitions are not usually held every year; because this is the China-New Zealand Year of Tourism an exception has been made, leading to the holding of The Amazing China-Hastings Year of Tourism.