All of New Zealand is at the orange traffic light setting of the Covid-19 Protection Framework When you are inside any public areas of any Hastings District Council facility (excluding our pools in Flaxmere and Clive) you are required to wear a mask. Click here to find out more about Life at Orange. Read more »
Keyword: #ngarimustreet 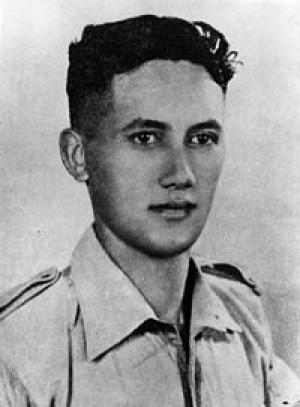 Ngārimu was the first Māori soldier to win the Victoria Cross (VC).

Te Moananui-a-Kiwa Ngārimu hailed from the East Coast, of Ngāti Porou and Te-Whanau-a-Apanui descent. He was born on 7 April 1918 in Whareponga, the son of Hamuera Meketu Ngarimu, and his wife Maraea. He attended Te Aute College in Hawke’s Bay for two years before working on the family farm.

He served in the 28th Māori Battalion during World War II, and was initially chosen for intelligence duties. He later became a second lieutenant and a platoon leader in the Battalion’s C Company.

Killed in action and buried in Tunisia, he was posthumously awarded the Victoria Cross for his courage and leadership during the battle for Point 209. (Citation below) A few weeks before he was killed he had written to his parents that he had dreamed of his great grandmother Hana Maraea. She was beckoning to him in the dream.

His VC was presented to his parents by Governor General Sir Cyril Newall, at a hui at Ruatoria on 6 October 1943 attended by government leaders, diplomatic representatives and 7000 Maori. The occasion was recorded by the National Film Unit and the films shown to Māori Battalion soldiers in Italy. His grandmother, Makere Ngarimu, died the night his Victoria Cross was presented.

Te Moananui-a-Kiwa Ngārimu is also commemorated by scholarships set up to remember his bravery and that of others lost from the Maori Battalion. "In June 1943, soon after Ngārimu had been killed in action, a gathering of Ngāti Porou, Te Whānau ā Apanui and Pākehā East Coast people took place to consider how to best commemorate the bravery of Ngārimu and the other members of the 28th Battalion, whose lives had been lost in World War II. It was decided to establish a scholarship fund to support Māori education.”

Ngarimu St was named on 20 July, 1961. While the Council minutes do not show the discussion or reasons, there is a high degree of confidence that this street was named after Victoria Cross (VC) Winner Te Moananui-a-Kiwa Ngārimu. Four months later, adjoining roads were renamed after VC winners Charles Upham, Keith Elliott and James Crichton.

“During the attack at Tebaga Gap in Tunisia on 26 March 1943, Second Lieutenant Ngārimu commanded a platoon. He was first to reach the crest of the hill and himself destroyed two enemy machine-gun posts.

The enemy counter-attacked, and in the course of hand-to-hand fighting, Lieutenant Ngārimu was twice wounded (once by rifle fire in the shoulder and later by shrapnel in the leg) and urged by both his Company Commander and Battalion Commander to go out of the line, but he refused to leave his post.

During the night the enemy succeeded in piercing the line; Lieutenant Ngārimu ran to the spot, killed some and drove back the rest with his tommy-gun and with stones, and led his men back to their old position. In the morning, he was killed while defying a further counter-attack.”