Hawke's Bay is in the orange traffic light setting of the Covid-19 Protection Framework. Click here to learn more about how Hastings District Council facilities will operate at orange. Read more »
Keyword: #sistercities The Sister City relationship between Hastings and Guilin was formalised on March 4, 1981, by the mayors of the time: JJ O’Connor, Hastings, and Liang Shan, Guilin.

It has been a long and enduring relationship since that time, with very many cultural exchange visits, the sharing of important milestones, and opportunities for educational and trade initiatives.

The formal signing of the protocol came following a visit by a Hastings delegation to Guilin to discuss the proposal, after consultation with the Chinese Embassy in Wellington in 1978.

It was an important moment for both Hastings and New Zealand, as it was the first Sister City relationship between a New Zealand city and a city in China.

The relationship was suggested by Hastings horticultural scientist Dr Don McKenzie, who had links with the Guangxi Institute of Botany in Guilin. In the late-1970s, Hastings was considering approaching a city in Japan to form a Sister City agreement when Dr Don, as he was known, suggested Guilin would be a better fit for Hastings.

While there are obvious differences – Guilin is almost five times the area of Hastings and has a vastly larger population (4.7 million) – the two districts also share things in common. Both have an average temperature of 19 degrees (although Guilin’s summer is wetter and more humid than Hastings), and both are excellent growing areas with a focus on the processing of fine local produce (including wine). The Sister City protocol aimed to build a relationship between the two cities that would develop social, economic, educational, and political understanding, and enable trade opportunities to be explored.

Since the agreement was signed there have been regular ‘goodwill’ visits between the two cities by business, local government and education leaders, skills exchanges (including horticultural and English language), inter-school cultural and educational visits, exhibitions in both cities, and increasing commercial and trade contacts.

Guilin is the second largest city in the Guangxi Zhuang Autonomous Region. Considered one of China’s most beautiful cities, Guilin is surrounded by two rivers and four lakes, and studded with sheer sided karst mountains.

The province is very popular with tourists who enjoy cycling, rock-climbing and bamboo rafting, while still wanting access to the finer things in life: fine restaurants, cafes and bars, excellent shopping and quality hotels.

Guilin has a rich culture and heritage. Today, more than 100 cultural relics and historical sites are under official government protection. These include fossils of human teeth dating back 50,000 years, stone implements, earthenware, ancient graves and 10,000-year-old skeletons, stone carvings and buildings.

The construction of a canal in 214BC, linking the Xiangjiang and Lijiang rivers for the freighting of military supplies, saw Guilin begin to develop into the geographic and strategically important hub it is today.

Well over 4 million people live in wider Guilin, a local government territory spanning both urban and rural communities. Guilin City has a population of more than 1.2 million  people living within 866  square kilometres.

Its governing system includes a mayor, nine deputy-mayors, and a comprehensive range of management departments. Guilin’s local government has maintained a strong focus on attracting tourists, both domestic and international, which is reflected in the availability of Western-style accommodation.

Education and research and development are also vital to the city. It has 22 research institutes,

There are currently no news articles. 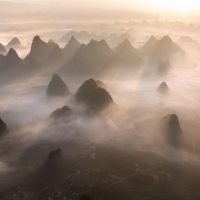 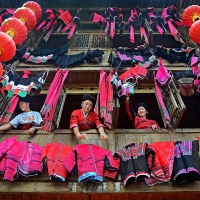 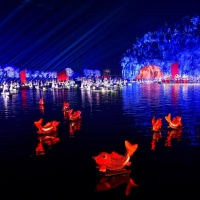 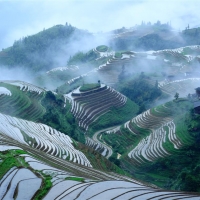 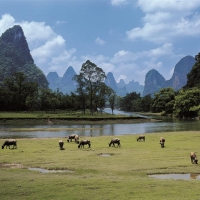