Hawke’s Bay Regional Sports Park is the region’s premier sporting venue and one that is developing a national reputation as an outstanding venue for major sporting and cultural events. It attracts 300,000 users per year. 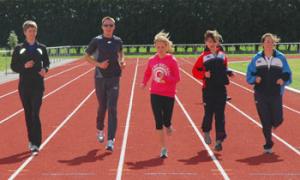 Hastings District Council is the primary funder of the park which is sited alongside the Napier Hastings expressway, meaning there is good access for residents of both cities and beyond.

All age groups use the park throughout the year; for netball, football, touch, league, CrossFit, hockey, athletics and more. Schools and other organisations use it for their annual sporting and cultural events.

At a national level, it hosts events including the New Zealand Secondary School athletic champs, Te Matatini kapa haka festival,  and a range of national and regional age group sports events. The Unison Hockey Stadium is a regular host of international hockey fixtures.

EIT Institute of sport and health

Construction of the EIT Institute of Sport and Health on the grounds of the Hawke's Bay Regional Sports Park is well underway; due for completion mid-2019. This is the most exciting sporting development the region has seen in a decade. It is a $16m facility that includes the PAK’nSAVE Hastings Sports Hall which contains an athletics training arena, a specialised strength and conditioning centre, training courts  for basketball, netball, volleyball and badminton.  The Royston Community Fitness Centre, EIT sports science lab and a café complete the ground level spaces.

Upstairs EIT will have teaching rooms, two conference rooms will be available for hire, and a number of sporting organisations will have tenancies.  The sports hall has been built with a roof height that will accommodate pole vault training and Olympic-level rock climbing disciplines.

In addition, there are plans for a 43 bed accommodation hostel to host visiting sport teams and individuals for training camps and competition in the Bay.

The Institute is being led by Sir Graeme Avery who also chairs the highly successful AUT Millennium Institute of Sport and Health in Auckland. Hastings District Council, which has supplied $4m in capital funding, is a major contributor to the facility.