Elliott Cres is one of four adjoining streets in the Anderson Park suburb in Havelock North named in 1961 after Victoria Cross winners. 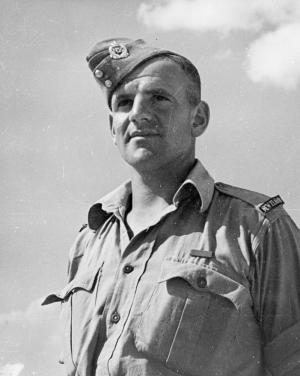 Keith Elliott was born on 25 April 1916 at Apiti, Manawatu, the eighth of nine children of Thomas Frank Capper Elliott, a farmer, and his wife, Ethel Marie Knyvett.

Since Victoria Cross holders were considered good for morale back home, Elliott, in spite of his protests, was returned to New Zealand. He married Margaret Markham, who he had met before the war, in 1944. They had five children together, Doug, Graeme, Peter, Mary and Elizabeth.

In 1947 he was ordained a minister in the Anglican Church. He served as Vicar in a number of parishes including working for many years at the Māori Mission before moving to Wellington as the Assistant City Missioner. He later became Welfare Officer for the Fire Service.

After a lifetime of committed service in both the military and the church, Keith Elliott died in 1989, in Wellington, aged 73.

While Council's minutes do not show the discussion or reasons, there is a high degree of confidence that Elliott Cres was named after Victoria Cross (VC) Winner Keith Elliott, who had ties to Hawke’s Bay and lived in Hastings.

At dawn on 15 July 1942 the battalion to which Sergeant Elliot belonged was attacked on three flanks by tanks. Under heavy tank, machine-gun and shell fire, Sergeant Elliott led the platoon he was commanding to the cover of a ridge 300-yards away, sustaining a chest wound in the process.

His section then came under fire from a machine-gun post on the left flank. He immediately charged this post single-handed and succeeded in capturing it, killing several of the enemy and taking 15 prisoners. During these two assaults he sustained three more wounds in the back and legs. Although badly wounded in four places, Sergeant Elliott refused to leave his men until he had reformed them, handed over his prisoners, which had increased to 130, and arranged for his men to rejoin the battalion.

Owing to Sergeant Elliott's quick grasp of the situation, great personal courage and leadership, 19 men, who were the only survivors of B Company of his battalion, captured and destroyed five machine-guns, one anti-tank gun, killed a great number of the enemy, and captured 130 prisoners. Sergeant Elliott sustained only one casualty amongst his men, and delivered him to the nearest advanced dressing station.

Copy of excerpt from Council minutes.