Luke is a Hastings legend; he knows where litter belongs – either in the recycling or in the bin. Not on the ground!

He is careful, taking recyclable rubbish like bottles, cans, paper and carboard home with him to add to his family’s recycling. If something is not recyclable, he makes sure it goes in the rubbish, either in a street or park bin or home to the family rubbish bin.

If he does have to get rid of something he can’t carry home, like a pizza or drinks bottle box, he makes sure he squashes it down before putting it in the bin; that way there is room for other people’s rubbish.

Luke can get pretty cross with people who litter. “It’s just thoughtless  - who do they think is going to pick it up? We love Hastings and it is beautiful, but it would be even more beautiful if we all did the right thing and put litter where it belongs.” 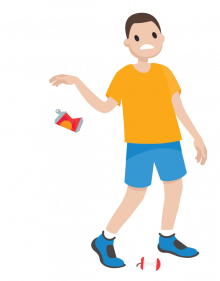 He gets really cross at Colin – the Cheeky Chucker.

Colin is very lazy; he will throw litter on the ground even if the bin is just a few steps away. He also throws rubbish out of the car window.

Luke is determined that over the next 12 months, he will change Colin’s ways.

“We need to teach Colin to be responsible with his rubbish. He needs to know that if we paid people to pick up his litter from wherever he chucks it, it could cost our district more than $1 million.”

Luke and Colin will be visiting primary schools, so the kids can help Luke convince Colin to do the right thing!