Credit card payment facility currently unavailable We are working with our provider to resolve the issue and apologise for the inconvenience. You can still pay via Poli online; directly via your own personal internet banking (please ensure an appropriate reference is used to enable the payment to be allocated correctly); or in person at the service centre (where you can still pay by credit card)

Hastings District Council has made a number of changes to speed limits around the district to improve road safety.

The 72 new speed limits were confirmed by council at a meeting held on December 8 2020 with the changes coming into effect from March 1 2021.

The speed limits came under review because the community had asked Council to look at the limits on a number of roads during previous reviews in 2018 and 2019.

Other roads were also reviewed because they were in the top ten per cent for Deaths and Serious injury crashes, where reducing the speed was the most beneficial and practical means to improve safety.

In some cases there were proposals to raise speed limits, but the majority were requests to lower them.

Consultation was held over six weeks starting in August this year, with people asked to identify whether they lived on the roads or travelled through them.

As such, the feedback consultation was never intended to be a referendum, rather it was a way for council to balance the technical information and best practice guidelines alongside local knowledge.

The 72 new speed limits were confirmed by council at a meeting held on December 8 2020 with the changes coming into effect from March 1 2021. Click the map below to see where the speed changes are. 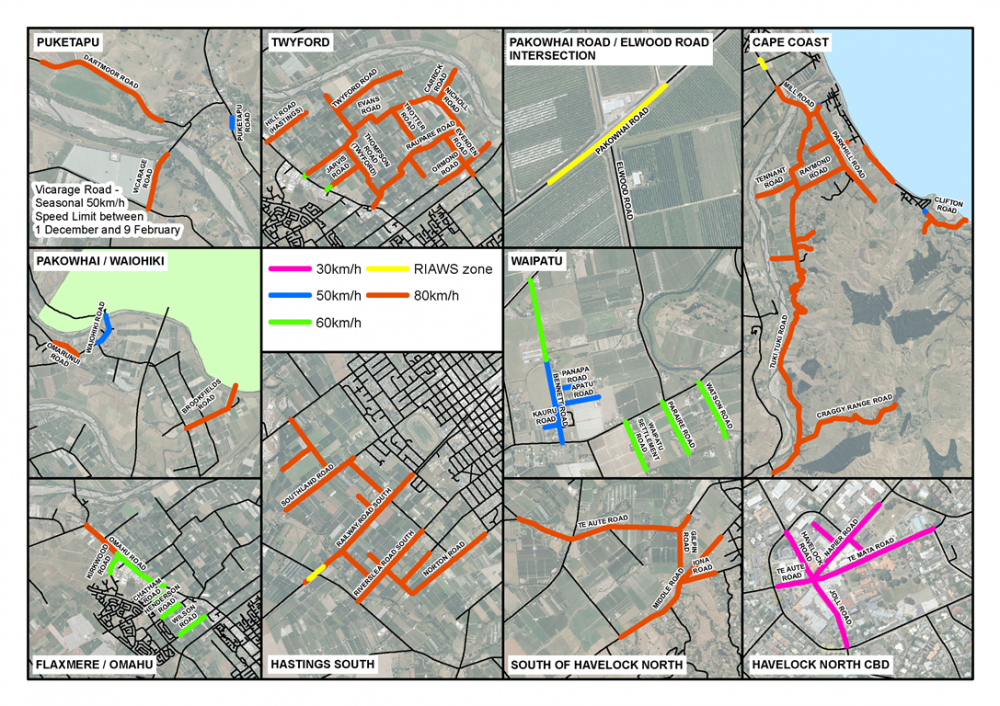 Norton, Park and Tollemache Roads are all busy, used by motorists as well as people walking and cycling for recreation. Traffic going at 100km/h is too fast. On Norton Rd the asphalt is only 2.5m wide in some parts and it’s very dangerous for pedestrians and cyclists. There are also numerous crashes in this area, a lot of which are not officially reported. Ideally it would be good to have these roads reduced to 50km/h to bring them in line with Riverslea Rd, but reducing to 80km/h would be a start. Colin Beswick, local resident

Lowering the speed limit is not only safer, it’s healthy for the mind. Waipatu should be a sanctuary where one can think and pause. Leave the hustle and bustle of the ‘rush hour traffic’  or the highways and byways and city work life. We are soon to have a kura in our midst. Let this place be good for families and children, not speed and heavy traffic. Waiariki Davis, local resident

I lived on the Middle Rd/Iona Rd intersection and corner for 27 years, and still live nearby. It is a deceptive corner and a dangerous area to travel at speed. Over those years I witnessed multiple crashes at that corner. This section of Middle Rd has also changed from rural to a developed, built up area with significantly increased traffic, families and cyclists. It is no longer an ‘open road’ and 100 km/h is simply not safe. I absolutely support the change to an 80km/h zone. Dr Mark Irwin, local resident

If the speed limit is raised on Pakowhai Rd, the concern is what that will mean for the safety of our students on Chesterhope Rd where Pakowhai School is situated. An increase in speed is only going to increase the hazard and I dread having to attend an accident where a family from the school is involved. The school also uses the footpath from the School to the Pakowhai Hall and back at certain times of the year and an increase in speed puts this journey more at risk. We believe that the speed limit should remain at 60km/h to enable the drivers to have time to make a safe right hand turns on and off Pakowhai Road. Paul Bremer, Pakowhai School principal

While engineering solutions can be used to improve road safety, along with education and enforcement, they can be expensive, and in many cases speed management is a more  appropriate tool.