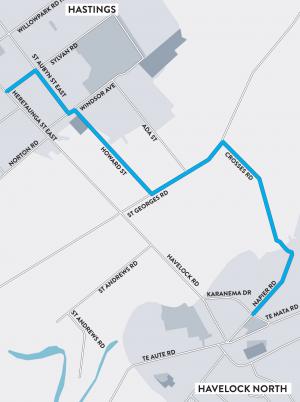 One of the largest projects included in the Hastings District Council’s water strategy is about to get underway.

The route for the new mains water pipe between Hastings and Havelock North has been finalised and a contractor is expected to be selected this month, after which work will start.

The $10 million project is a major plank in Council’s water strategy, and will build resilience, additional capacity and flexibility into the district’s drinking water supply.

Mayor Sandra Hazlehurst said the mains water pipe is a vital part of the council’s water strategy which is focused on making improvements to the district’s urban drinking water system.

“This is a very, very important connection that will carry water to Havelock North.

“The council will be careful to keep inconveniences to a minimum, and we must thank residents for their patience throughout this project”.

Residents and business owners have been advised of the route this week and community meetings will be held once a contractor has been chosen. The wider public will be advised using traditional and on-line media.

The route, which runs from Sylvan Rd in Hastings to Napier Rd in Havelock North, will complement the existing water main, which runs along Havelock Rd and provide an alternative supply to Havelock North to replace the Brookvale bore supply.

Once the new main is operating, the last of the Brookvale bores, which were implicated in the 2016 water contamination, will be turned off.