Ground-breaking for water main next week 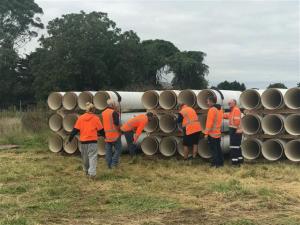 The construction of a new Hastings to Havelock North water main gets underway next week, after contractors March Construction took over the site on Wednesday (February 28).

Traffic management is being set up over the next few days ahead of the start of physical work, expected to get underway on Monday.

Mayor Sandra Hazlehurst said the water pipeline is an essential part of the council’s water strategy, which is focused on ensuring safe and reliable improvements to the district’s urban drinking water system. “We will be keeping all of our affected communities up to date along the way about this very important connection that will carry water to Havelock North.”

The route, which runs from Sylvan Rd in Hastings to Napier Rd in Havelock North (via St Aubyn St, Windsor Ave, Howard St, St George’s Rd and Crosses Rd), will complement the existing water main, which runs along Havelock Rd.

The work will start at three sites across the length of the route: at Crosses Rd heading north; St George’s Rd heading west; the middle of Howard St heading north. Residents along the route had been advised of the work plan, and had been individually contacted to address any specific concerns. Businesses owners and residents with particular needs had been given access to a key account manager to assist with any issues.

The pipe would be laid as close to the edge of the roadway as practical, however that would not always be possible, said Council’s works and services committee chairman Kevin Watkins. “The chosen route is the most direct line between the two areas, taking into account that we wanted it away from the existing main to increase resilience, it uses Council-owned land to avoid involving private property, and it can be completed within a reasonable timeframe.

“As always, when we are putting in major once-in-a-generation infrastructure, there will be some impacts on residents living along the route and the wider travelling public. We have put in place a very comprehensive communications plan which has already involved multiple messages going out to affected residents, and now we are talking to the broader community,” he said.

Road closures will be kept to a minimum and avoided as much as possible. There will be periods of time when traffic flows will be slower than normal.

The $10 million water main is a key initiative in Hastings District Council’s water strategy, designed to improve the capacity, flexibility and of the drinking water system. Once the second main is operating, the last of the Brookvale bores, which were implicated in the 2016 water contamination, will be turned off. The project is expected to be completed by the end of November.