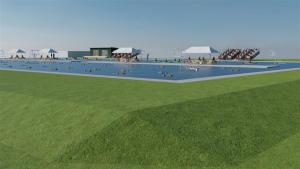 Wow: An artist’s impression of the new canoe polo courts.

Four canoe polo courts with ‘wow factor’ will be ready for action in Hastings by next year, with three quarters of the money needed already raised.

The courts, covering an area the size of a rugby field, will be at the Hawke’s Bay Regional Sports Park, sited near the changing sheds at the Frimley end of the Park.

“As well as being a real boost for the many hundreds of people in our region who play canoe polo, it will be an attraction for the community as well,” said sports park manager Jock Mackintosh. “Canoe polo is a very exciting spectator sport and the action will take place on what will be the best courts in New Zealand.”

More than 700 people aged between 10 and 60 play the sport in Hawke’s Bay, out of the 2200 registered with clubs across New Zealand. Given the love of water sports in the region those involved have no doubt the numbers will increase rapidly given a purpose-built facility.

Through the Long Term Plan process, Hastings District Council granted $250,000 to the project. Funds committed by Canoe Polo Hawke’s Bay and Eastern and Central and NZCT, brought the total to $500,000, with another $250,000 needed to reach the goal.

The courts could also be used for small boat activity and the swimming legs of short course triathlons, said Mr Mackintosh.

Canoe Polo Hawke’s Bay chairman Kelly Hepburn said the club was very pleased to see the project being supported on so many levels. “It’s fantastic to have councillors excited about this project and have the financial support of Council.”

The club has a strong focus on building participation at the primary school level and numbers had grown by almost 18 per cent over the last two seasons. Of the 445 registered this year, about 65 per cent came from Hastings with the rest based in Napier. All the children’s teams are set up through their primary or intermediate school.

“It has been very tricky managing practices and games for 60-plus junior teams, not to mention the seniors, without a purpose-built facility. This is going to make the world of difference. As well as providing space for our local teams, this will mean we can hold competitions across all levels, from primary through to elite adult, both at national and international level,” Mrs Hepburn said.

Council’s facilities manager Alison Banks said that as well as supplying a made-to-measure facility for canoe polo, the new courts could potentially free up time slots at the public swimming pools, by moving trainings out of those pools and onto the sports park.

Hastings mayor Sandra Hazlehurst said there was a strong direction from the community to fund the outdoor aquatic facility.  “This will be a wonderful addition to our district’s sporting infrastructure overall and to our regional sports park in particular.

“Canoe Polo Hawke’s Bay has the most players in New Zealand per head of population, and they are raising a lot of money themselves for this facility.

“I have no doubt these courts will attract national competitions, which will bring more visitors to enjoy our amazing district.”

Mr Mackintosh said construction was expected to start later this year and take about four months.