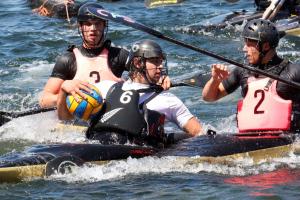 The canoe polo scene in Europe has given young Hawke’s Bay players a taste of international competition and they are keen to bring back some ideas – and make use of the coming new canoe polo facility at the HB Regional Sports Park.

The New Zealand under-21 Canoe Polo team has been training in Europe for the past two weeks in the build-up to the ICF World Canoe Polo championships in Canada in early August.

Hawke’s Bay teammates Ethan Flanders, Andrew Bowden, Liam Ward, Jake Talbot and Liam Bowden are members of the eight-strong New Zealand under-21 men’s canoe polo team and have been playing in the Netherlands and Germany.

Captain Ethan Flanders said their first competition brought a high level of canoe polo to the fore and he marvelled at the opportunities afforded the Europeans.

“After playing some very high level of canoe polo, it’s no wonder the Europeans show such a high level of skill and physicality, with having such easy access to good facilities.”

He said the skill level of young players was evident and, with courts close to club rooms, it was attracting even more players and a large following of supporters.

With Hastings District Council granting funding towards new canoe polo courts at the Hawke’s Bay Sports Park, Flanders was looking forward to seeing growth in player and supporter numbers in the coming years.

However, his focus at the moment is on the team and making a splash in Canada. “The team culture is growing stronger and stronger which is creating a positive vibe on and off the water, even with some hard learnings from recent competitions.

“This is the exact reason we decided to come early, play some great polo in the sunshine, and to learn and grow our canoe polo knowledge.”