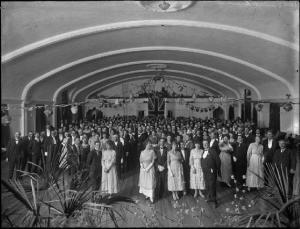 Light and space, with a focus on the performing arts in their broadest form, are at the heart of a proposal for the redesign of the Municipal Buildings.

The design will go out for public consultation next month.

In 2016, when Council held a full consultation process to help find the best way forward for the Opera House, Plaza and Municipal Buildings, the public agreed that a new use or uses needed to be found for the Municipal Buildings before earthquake strengthening and redeveloping should be undertaken.

Since then, in-depth discussions with the arts community, iwi and others who had been closely involved with the facility over the decades had informed a proposal, leading to a document that will be released for public feedback in August.

The vision is for a performing arts hub, catering for a huge range of activities; from music and dance to theatre and culinary.

Hastings Mayor Sandra Hazlehurst said the proposed plans for the precinct, including the Hawke’s Bay Opera House and Municipal Buildings, were visionary and exciting.

“The plans aim to enhance the vibe of the area and the vibrancy of the city centre.  The redeveloped precinct will be welcoming, alive and make the best use of the beautiful spaces available.  It will provide venue space for all events, and areas to celebrate our arts and culture.”

The proposal includes a plan for the laneway between the Opera House and the Municipal Building – until today little more than an access alley. It could become an architectural statement, with ideas including making it a ‘light path’.

“The proposal fits with the input we have had, particularly from the arts community and Ngati Kahungunu,” said Hastings District facilities and programmes group manager Alison Banks.

In the Opera House, the new roof has been completed and the building of the sheer walls had reached the first floor.

Completing that floor and then the third and last level will take about another 12 to 15 months. The process sees each of the 100-year-old unreinforced earthquake-prone brick walls encased in steel rod mesh, which is ‘pinned’ to the brick, explained Focus Project Management’s Herman Wismeyer. Reusable plastic ‘boxing is then erected and concrete poured into the recess. That results in an average 300cm-thick wall of concrete, laid up against the old bricks.

In October last year the foundations were strengthened before work started on the walls. The ground floor walls were completed in June.

Mrs Banks said the programme was running on time and on budget, with a reopening of the Opera House scheduled for late next year.

“Once again we will be able to use what is our most loved historic building. When Council asked residents if they wanted the building to be earthquake-strengthened the overwhelming answer was yes. Now, as we almost reach the halfway point, we can see the time when once again it will be well-used by our community for local and visiting productions and events.”

In the meantime the Plaza has had its glass walls and canvas roof removed and its recessed floor filled in.

Final designs for the space, including the new roof, are expected to be revealed in October, after which work on making it an all-weather facility will start. It is expected to reopen for use next year.

Mrs Banks confirmed last week that the etched glass panels that previously formed the front wall of the Plaza would be used within the precinct. “They are not suitable as a wall for the new building – for that we need double-glazing, however they will definitely be used. When the Plaza redesign detail is complete out we will be able to confirm how that will be.”

Mr Dixon said that during the public consultation on the overall project, residents were very keen to see the Plaza remodelled into an all-weather facility.

“It will be ideal for conferences, large functions and events, balls, concerts and weddings – almost anything you can think of. It is going to be truly multi-functional space that is a real asset for our district.”