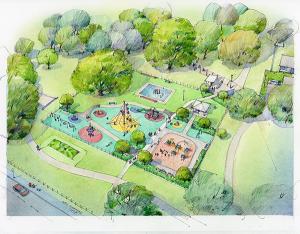 An artist’s impression of the soon to be revamped Flaxmere Park playground.

The Flaxmere Park playground upgrade is coming along nicely, with most of the play equipment purchased and groundworks set to start on Monday next week.

The 17-hectare Flaxmere Park has been undergoing an overall upgrade as part of a $1.2m 10-year plan for the park.

Over the last seven years, $900,000 of that money has been spent on the likes of a new playground, splash pad, new toilets, fencing, lighting, car parking, picnic furniture, exercise stations and the shared walking and cycling track.

In April this year, the Hastings District Council met with the Flaxmere community to find out what they wanted to spend the remaining funds on, and the overwhelming feedback was new play gear, and a space similar to the popular Havelock North Village Green.

This vision is getting close to reality, with play equipment similar to that at the Village Green now purchased, including a 7.2m high climbing frame – the tallest in the district.

Applications are also being put in for community funding to purchase a big slide tower, and the council will find out if this has been successful next month.

In the meantime, work on the park will start on Monday next week, preparing the area to be open in November in time for families to enjoy the new space over the summer holidays.

The first groundworks will include the removal of two trees near the playground – a poplar and a cedar.

The large poplar located near the park toilets is being removed to stop the fluff the trees produce from floating into the splash pad during summer.

This tree has also lost a couple of large limbs in the last two years presenting a safety risk, and the cedar is being removed to make way for the new play equipment.

Flaxmere ward councillor Jacoby Poulain says she supports the removal of the trees, the poplar tree in particular as in recent years it had grown very large and in full bloom distributed a lot of airborne fluff and pollen causing major allergies for some.

“The fluff also threatens to clog the water pumps of the splash pad, which we don’t want. To me it’s really a health and safety issue to protect our people and with spring allergy season coming it’s a good time to address it.”

Replacement shade trees will be planted in and around the playground, and the felled trees will be made available to the community for firewood.