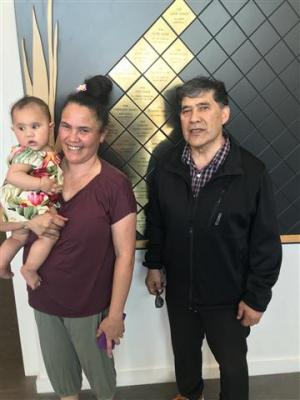 Macherie Edwards, holding daughter Arlee-Rae was there on behalf of her brother Parlayne Hawea, and Ra Southon attended on behalf of his basketballer son Ben Southon.

Flaxmere’s high achievers have been recognised with the reinstatement of the Flaxmere Heroes Board at a celebration this week.

About 40 people gathered at the Flaxmere Community Centre on Wednesday to take part in a small ceremony to honour the 29 people whose names currently appear on plaques on the board, with more to be added in the future.

One of those attending was Macherie Edwards, whose brother Parlayne Hawea featured on the board for his New Zealand representation in basketball, as did her cousin Kayne Hawea who had enjoyed success with New Zealand junior basketball.

She said the whole family grew up in Flaxmere and that the recognition was “awesome”.

“It’s important to be recognised – we’ve all moved away now but Flaxmere’s always been my home – it’s cool to touch base with my roots, and this is a great way to remind the kids here of what we have.”

While many of the people recognised had played sport to a high level – including basketball, rugby, karate, darts, taekwondo, netball, touch rugby and chess – other contributions, such as to New Zealand and international music, were also highlighted.

Hastings mayor Sandra Hazlehurst attended the celebration and said some special names were on the board representing a diverse range of disciplines.

“Flaxmere has it all and there’s many more names that will go up here – this is just the beginning.”

Mr Heke said the newest addition to the centre was “another beam of light to get things happening here in Flaxmere”.