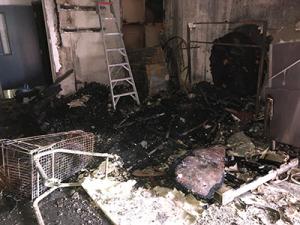 Although the fire at the Hawke’s Bay Opera House on Sunday night caused some damage that will need cleaning up, the earthquake strengthening project will still be completed on time and on budget.

After conducting their investigations, the Police and Fire Service confirmed that this fire, along with two others on the same night within a 1km radius, was being treated as suspicious.

A person broke into the loading bay at the back of the Opera House on Sunday night and lit a fire there that caused some damage in the immediate vicinity, as well as smoke damage on the floors above.

The major challenge in cleaning up after the fire will be dealing to the soot and smell in the stage area that spread all the way up to the roof space.

Fortunately proper protocols had been followed, which prevented the smoke from extending beyond the back stage and stage area.

As such, the auditorium was unaffected.

There was, however, a considerable amount of soot to be cleaned up on the stage, and the stage roof areas including the curtains and theatre rigging system.

The costs and logistics of getting the clean-up work done are being discussed with the council’s insurers.

Councillor Malcolm Dixon said he had talked to some of the team from Gemco who were carrying out the earthquake strengthening work.

“These people are very proud to be involved in this project and it’s a bit tough on them that something like this has happened. I want to acknowledge their efforts.”

Mayor Sandra Hazlehurst said while it was really disappointing to have parts of the Opera House damaged by the fire, this incident will not hold up the precinct development.

“We are really grateful for the hard-work and dedication given to this project by our contractors, community and all those involved in the project.  We are really confident this beloved community facility will be open again by this time next year.”

Mayor Hazlehurst said a blessing will be held at the Opera House this Friday afternoon to ensure there is a positive way forward for the rest of the development.