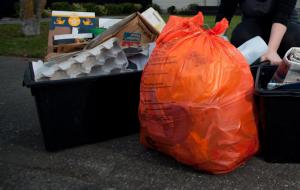 Options that could potentially divert large portions of household rubbish from being dumped into the landfill are a step closer to going out for public consultation in February.

It has been put together by a joint committee of the Hastings District and Napier City councils. Napier will consider the plan for adoption next Wednesday (December 20).

The main goal of the plan is to drastically reduce the amount of recyclables and green waste mixed in with the general rubbish which is then tipped into the Omarunui Landfill.

Rubbish audits have shown that over 50 per cent of rubbish picked up from outside homes is recyclable or compostable. Over a third of the waste received at landfill is organic, including garden and kitchen waste.

Getting those materials out of the general waste stream would extend the life of the landfill and take stress of the environment, said Joint Council Waste Futures Project Steering chairperson and Hastings District councillor Tania Kerr.

Waste services staff from both councils had investigated a number of options for dealing with rubbish, with cost-benefit analysis confirming that increasing recycling and composting was the best value for money.

Based on that, options designed to encourage householders to separate their general and recyclable rubbish had been put together for community and industry discussion,

Those options are based on improving the two council’s kerbside collections. Depending on the outcome of the consultation, that might include providing different bins for different types of recycling. Other initiatives could include broadening the collection zones to include semi-rural properties and the central business districts, and investigating options for areas difficult to access and multi-unit properties, such as apartment buildings.

Mrs Kerr said public and industry feedback on the options will be very important as the final decisions are made.

“The decisions we make very much rely on having the public in full support of them. Success will depend on people being willing to take those extra steps when putting out their rubbish.

“Imagine the difference if we all sorted our rubbish so that 50 per cent less household waste went into the landfill. That will make a very impressive difference to the future of our landfill and have the flow-on effect of having a very positive effect for the environment.”

A comprehensive consultation and communication plan is being put together to ensure all those who want to have a say on the plan have the opportunity. That will include meetings with the rubbish collection industry.

“We really look forward to the community letting us know their thoughts and encourage everyone to be involved,” said Mrs Kerr.