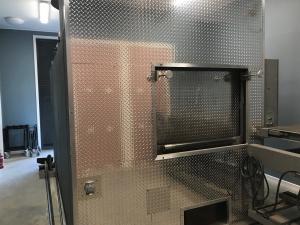 Cremations are running as normal at Hastings Cemetery and the rebuilding of the adjacent Chapel is progressing well.

There appeared to have been some misunderstanding in the community, she said. “There appears to be a belief that cremations may not be happening at Hastings Cemetery. That’s not so – they have been running normally, apart from about 10 days in November when the cremator was moved into its new building. And we’re very pleased that the building is functioning exceptionally well.”

The issues with that building were mainly around being able to comfortably and safely accommodate a new larger cremator, purchased in 2015, and health and safety issues for the staff. “The new building and the new office area are fit-for-purpose and we are very pleased,” she said.

The issues with the chapel were earthquake strength, its limited size and difficult layout. A final decision was made in 2016 to build a new facility that would have increased earthquake strength, could welcome more people, and allowed all of the congregation to see speakers during a service.

The shape of the new building could now clearly be seen as the walls are erected.

The Hawke’s Bay Crematorium Committee that runs the crematorium and chapel is made up of representatives from the Hastings, Napier and Central Hawke’s Bay councils. Hastings councillor and committee chairman Malcolm Dixon, said the progress was pleasing. “It is going to be a very attractive and practical building that will enable us to provide excellent service now and into the future.”