Bores on the move 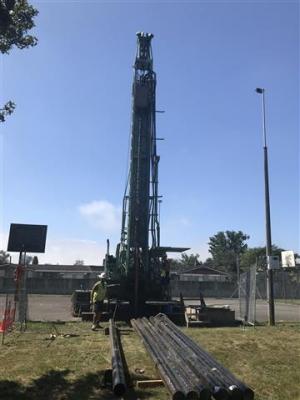 Two of the district’s drinking water bores are being moved but will stay within the reserves they are currently sited in.

In Whakatu, a new bore to supply the local community has been sunk about 50 metres from the original, within Ngaruroro Ave Reserve. The shift moves it away from tree roots which were threatening the bore’s integrity. As set out in the Hastings District Council water strategy, the bore head will be above ground and the water will be chlorinated at the site. A UV treatment plant will be later added as part of a wider programme to apply that treatment to all of the district’s public water supplies.

In Flaxmere, the bore towards the Wilson Rd end of Flaxmere Park will be moved about 70 m towards Henderson Rd. It will still be sited about the same distance from the boundary of the park.

The moving of the Flaxmere bore will coincide with the addition of UV treatment of the water. The current water supply is chlorinated and that process will be retained. The move will provide further separation between wastewater and drinking water infrastructure.

There would be some noise and vibration as the drilling process was completed, said Council’s works and services committee chairman Kevin Watkins.

“We contacted all Whakatu residents prior to the drilling and are about to contact those in Flaxmere. The periods of noise will be relatively short and we do thank you in advance for your patience.”

The drilling of the bore in Whakatu is completed, and after water testing it should be supplying the local homes by the end of April.

The Flaxmere project is scheduled to start at the end of March, subject to the tender process, and should be supplying water into the system by the end of July, with final tidy-up work completed by early August. The drilling work is scheduled for mid-April.  Some tracks in the area of work in Flaxmere Park will need to be closed for safety while the work is undertaken.