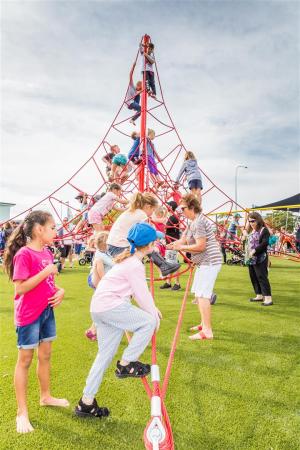 Putting in more play gear and saving the pond are the priorities for almost all of the people who responded to questions on an upgrade of Flaxmere Park.

Two projects were up for discussion at a gathering in the park last Saturday [April 21]: what to spend the $300,000 left in the park’s 10-year-plan budget on; and whether to replace the pond with a new one or use the estimated $250,000 spend on other facilities in the park.

The discussion about the pond arose from the need to line it, to provide a barrier between the surface water and the underlying aquifer. If kept, the pond will need to be removed and a new pond with an impermeable liner built. Early investigations show that the pond is likely to be round, about three-quarters the size it is now and, for safety, be less than 400mm deep.

About 60 people attended an information gathering at the park on Saturday, with about 75 per cent wanting to keep the pond. That result was reflected in comments on the subject across three Facebook sites. Seven posts reached 11,200 feeds.

“It is great to have this feedback; we did not want to make any decisions on what to do with the pond - keep it or use the funds for something else - without talking to our community first,” said Hastings District councillor Henare O’Keefe.

The other topic of discussion was the spending of the remaining $300,000 in the park’s $1.2 million 10-year-plan budget. The funds had been earmarked for more car parking and an access road through the park. Over the last seven years, $900,000 had been spent in the 17-hectare park, including on the new playground, splash pad, new toilets, fencing, lighting, car parking, picnic furniture and the shared walking and cycling track.

The community said it would rather spend the remaining money on more play features, with ideas including a rope climber (such as the ones in Havelock North’s Village Green and Frimley Park), a children’s cycle road (similar to the one on Napier’s foreshore) and an extension to the enormously popular splash pad.

Mr O’Keefe said the turnout on Saturday was “very healthy and very enthusiastic and positive”.

“There was a lot of great input; and quite a lot of excitement about the next steps. Everyone seemed to agree that the parking and access to the park was fine and there were better, more exciting ways to make the most of this funding.”

Council staff said that as part of the upgrade, the existing splash pad would be resurfaced. It was one of the first to

be installed in Hastings, and technological advances meant there were better surfaces now; seven years on.

“And there’s been literally thousands of little feet all over that splash pad in those seven years, so it’s had its fair share of wear and tear. It’s probably one of the most popular things that we have in our suburb,” said Mr O’Keefe.

There was also interest in having more gym gear in the park; something the community would not have to wait for. Five more exercise stations will be set up in the park in the coming months, with the exercise equipment on its way from the manufacturers. That will take the number of exercise stations around the 1.3km perimeter track to seven. At the same time the existing shared walking and cycling track will be upgraded.

Council staff would now put a plan together, based on the community’s input.